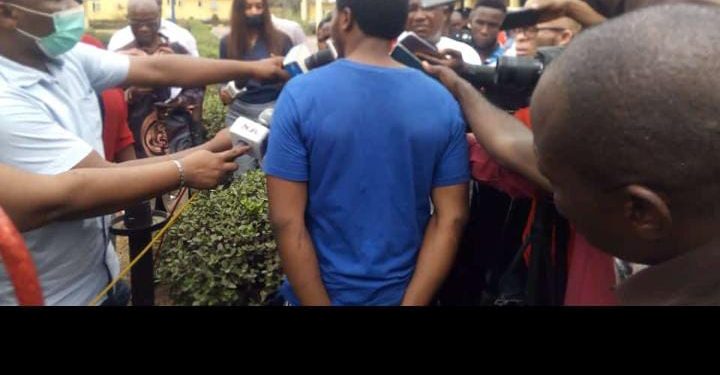 Emeka Nwogbo, a teacher at Arise and Shine Nursery and Primary School Asaba, apprehended over allegations of beating his 19-month-old pupil, Obinna Udeze, to death, has debunked the allegation.

Nwogbo argued that there must be other underlying issues that killed Udeze as he claimed the child didn’t die while he was punishing him.

He stated that he flogged the late Udeze as he had to whip ’a baby’ and that the child was punished because he pushed another child.

“I am not responsible for his death. They should go and check this thing very well. I flogged the child because he pushed another child and hit the other child’s head,” he added.

The 19-month-old pupil breathed her last after allegedly being given 31 strokes of the cane by the school owner on Monday, February 7, 2022.

The baby had fallen into a coma after he was beaten while the beating left several marks on his body, and died five days later at the Federal Medical Centre, Asaba, the state capital.

While addressing the journalists, the state police commissioner, Ari Muhammed Ali, said a” post mortem examination will be carried out to ascertain at least the cause of death.”

Re: Ikoyi tragedy and casual bigotry against Yoruba Muslims: my views, my experiences

Insecurity: Reengaging ‘Yan Sa-Kai and the need for caution in Zamfara