Towards achieving unity in Nigeria

by Admin
in National, Opinion
0 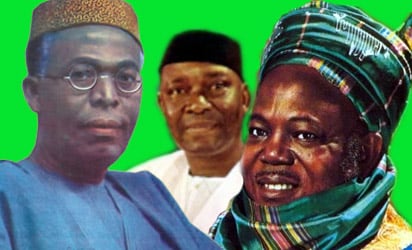 The amalgamation of the protectorates in 1914 predetermined a united state for multiple precolonial chiefdoms. Highly diverse Nigeria featured by a rainbow of cultures is deeply fractioned along ethnic and religious lines.

Imperial misrule left a bad legacy for national unity. Regional devolution caused intense tussles among regional forces over the powerful central authority, which was the basis for post-independence sectarian disputes.

Thus, six-year-old Nigeria witnessed a catastrophic separatist war that took the lives of many heroes. Since the aftermath of the bloodletting, the country has been bedevilled with lingering ethno-nationalisms coupled with regular fatal brawls between the tribes. This was due to extreme polarization and segregation of the heterogeneous groups with no sense of togetherness, community cohesion and dovishness.

Deeply ingrained tensions have been the order of the day. Igbos accuse Northerners of their grief and impeding their chances of realising the apex power. The Northerners equally see the Igbos as power maniacs. Yorubas feel discontented with the status quo, while minorities have the impression of a roughshod ride over them.

Tribal and religious absolutism are awful threats as multiculturalism has failed, and communities have become ever more fragmented. Patriotism has eroded, and Nigerians are less tied by the bond of nationality. They are no longer one united people and do not regard themselves as national brothers with a sense of shared identity. Hence, there is an absence of the desired unity in diversity, tolerance and integration.

Politicians must develop the impulse and genuine commitment to national unity. They must believe that this is a dire task that transcends beyond cultural exhibitions, festivities or even wearing traditional attires of host communities during political rallies. Instead, it requires solid whims, sacrifice and effective policies.

Technocrats are required to accomplish this task efficiently. They must design policies that ensure equitable treatment of the ethnocultural groups alongside the creation of space for all the divergent voices to be heard. Everybody must have a say in society. Moreover, they must devise ways to live together harmoniously, without prejudice or malice.

Integration is so effective in ensuring peaceful coexistence between fractious groups. Therefore, increased contact across the nation should be emphasised, and Nigerians should increasingly intermingle with one another. This will allow people to live closer to one another, work amicably, and ensure that relations remain peaceful. Therefore, disputes will vanish obstinately.

This can only be realised if there is an honour for individual cultural preferences in public life. All institutions must make special provisions for all Nigerians’ choices and cultural needs. So, everybody will develop a worthy stake in the social order. Policies must be put in place to accommodate the values, diet, dressing, spiritual convictions, and practices respectably.

We need to facilitate multilingualism by encouraging people to learn several native languages. Speaking one another’s languages diminishes suspicion, tensions and conflict. This will also build trust, honour and understanding across all cultures.

Social exclusion creates deficient opportunities for disadvantaged/minority groups suggesting that they don’t have equal rights. As a result, they are treated as second class citizens, hindering cohesion and egalitarianism featured by social inclusion and pluralism. Moreover, it leads to distress to the abandoned groups, which poses a persistent threat of disharmony. However, institutions must make efforts to meet the needs of all communities and not tilt towards the needs of a particular section.

Regrettably, the tribes have distorted perceptions of each other. Malevolence aggravates because of misleading histories and myths falsifying the reality and typically portraying others as diabolic. They hold malicious convictions and stereotype each other based on their previously treated beliefs. Any trivial provocation warrants the impression and becomes a basis for vengeance. The exasperation of hostilities by IPOB, ESN, Afenifere and others are clear examples.

It is needful to enact a statute outlawing attitudes of these tribes calling one another with derogatory or slur names that denigrate or demonise others. Ethnicities hardly unite if they are abusing one another.

The present mass idleness must be evaded alongside the creation of decent jobs. Graduates happen to be jobless long after they have left school. Similarly, numerous unknowledgeable youths remain redundant. Ethnic and religious skirmishes intensify every day due to hardships encountered by youths in their efforts to have a lawful means of subsistence. Many of them have the requisite skills and qualifications but found them not helpful in securing employment. They have fallen victim to anxieties, delays, and disparagement and developed a strong feeling of despair, oppression, and unfairness. Hence, they engage in crimes or sectional clashes to counter the injustice and avoid the distress of poverty.

With such dissimilarities in all parts of society, tolerance is indispensable if Nigerians want to live in peace. The capacity to live in a plural society will secure a harmonious future for multiethnic Nigeria. However, Martin Luther King Jr. once said to Americans at the peak of racial segregation that “we must learn to live together as brothers or perish together as fools.”

Lawi Auwal Yusuf wrote from Kano, Nigeria. He can be reached via laymaikanawa@gmail.com.

Media as watchdog: foe to government, friend to masses