The untold story of Kano’s special education school (I)

by Admin
in Education, Local, News
1 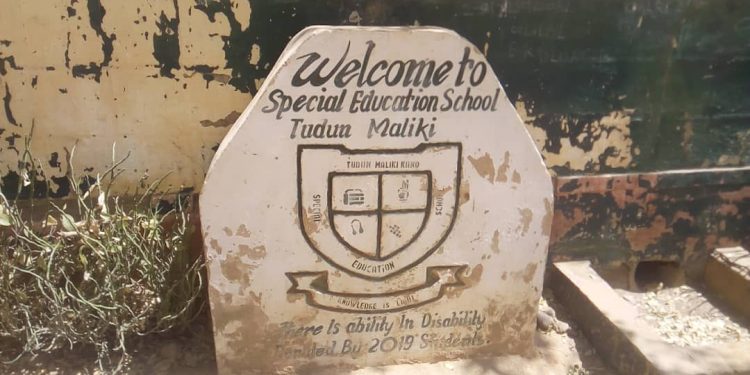 Established as the centre for juvenile delinquents in 1958 and later converted to Special Education School in 1977, it is Kano’s premier and most important school for Persons with Special Needs from Kano and beyond. In part one of this special report, the Daily Reality reporter, Aminu Adamu Naganye presents the general condition of school from classes, furniture to hostels. And how the shortage of learning materials hampers the learning process of the students.

Approaching of classrooms in the junior secondary school section of Kano Special Education School, Tudun Maliki, The Daily Reality observed how a teacher was trying hard to obviously settle a fight between two hearing-impaired students. “Judging and settling fights are a daily routine here,” said a smiling teacher who likened their work to that of judges.

Established prior to Nigeria’s independence in 1958 as a centre for keeping juvenile delinquents, it was later transformed into a school for hearing and visually impaired pupils in 1977. At the inception, the special school “started with four (4) visually impaired students and seven (7) teachers.”

Although the school director and teachers do not entertain journalists in the school for apparent fear of possible backlash from the authorities who often deny or trivialise the problem, the school accepts NGOs who support the school with learning and teaching materials in addition to supporting the pupils with detergent and laundry stuff. TDR relied on an NGO’s visit to file this report.

It can be recalled that recently the school became a public sensation, especially on social media when some visitors posted dilapidated conditions of the students’ toilets which prompted the Kumbotso Local Government Chairman to come to their rescue by renovating one toilet and constructing another in the school; another philanthropist also built a toilet for the students as shown by a teacher.

Although there are other special education schools at the primary level for the persons with special needs in Kano, this particular school is actually unique as it allows them to culminate into senior secondary school. “There are primary school sections of this type established by some metropolitan LGAs in Kano. So after their primary education there, they come here to continue to secondary school” said a teacher.

Dilapidated classrooms and hostels, in need of renovation

Considering the fact that there are few special education schools of this type that impart knowledge to persons with special needs in the state, it is expected that this very school should have standard classrooms and hostels for this unique breed of students. However, classrooms at the school were anything but befitting for learning and teaching. “It is not conducive for learning and teaching the state of the classrooms, especially the primary section,” said a teacher, “there are no seats in the classes, and the students sit on a bare floor. The windows and even the doors to the classes are all broken” narrated the teacher as he ushered our reporter into primary six class.

The sign language/gesture with which they greeted our reporter tells the fertile minds, hearts and brains eager to learn and expand frontiers of knowledge not just in the hearing impaired community but also in the larger society. With their complete white uniforms, the hearing-impaired pupils look dirty and untidy for obviously having constant contact with bare floor due to the absence of desks and chairs in the class. What is startling is the apparent joyous and smiling faces of these innocent souls full of hopes and dreams as they welcome us into their supposedly learning vicinity. In most of the primary school classes, there was no single chair or desk for the students’ learning convenience. In a class where few desks were available, they were broken and not convenient for sitting, writing and learning. “That is how all of us manage the situation. The teachers and pupils are doing their best in this environment,” said one teacher.

Passing through the students’ hostel blocks, the story is the same. The sorry condition of the dormitory is visible from any angle. Most of the windows are broken and the doors are not any better. “It is terrible when it is very cold because the windows as you can see are broken,” said the teacher in whose company our reporter moved around the school. Similarly, it is terrifying the condition of both the hostels and the beds for the students; the beds are grossly inadequate, leaving many students to sleep on the floor with mattresses alone due to a shortage of bunk. The teacher guide said they pity the students, especially in cold weather but there is nothing they could do personally to help the situation.

Despite our reporter’s inability to get into the hostels but peeping through the broken windows reveals their dilapidated conditions ranging from shattered windows, scratched and cracked walls to badly spoiled ceilings.

A teacher whose identity could not be revealed appealed thus “Government owns the school and it’s doing its best. But I still call on the government to do more. I also call on NGOs and affluent people to come and help, to support government efforts. There are a lot of things to do here. A lot of problems to solve especially in classrooms because you can’t learn in an unconducive learning environment. As you have seen in the primary section of the school, they sit and learn on a bare floor. There are no seats. The windows are broken”

“We need additional hostels. There is a shortage of even beds. Some students are sleeping on the bare floor of course with either a mattress or mat. We have a lot of students but the accommodation isn’t enough. We need both bunks and a hostel block. Especially during cold weather. If you check the hostel, they need to be renovated. But as the saying goes a ‘single tree cannot make a forest.’ “We hope people and organisations should come and support the government,” he added.

Dearth of teaching and learning materials

The peculiarity of the kind of students of the Special Education School requires unique learning instruments to impart knowledge to them successfully. Although it was relatively easier to teach hearing-impaired students using sign language, a blackboard and chalk-like conventional students, it is more challenging to teach visually impaired students how to write and subsequently read their writings. A teacher corroborated this when he said, “Honestly, we don’t have the material for teaching and learning on the ground…if you take the hearing impaired students there is a little problem because they use learning materials like everyone such as chalk, blackboard, textbook etc. Even though we don’t have textbooks but their parents buy for them.”

But for the visually impaired students, he explained that “That is where we have a very big problem. Previously, NGOs used to bring learning materials. Now they don’t bring such things. And their (visually impaired) learning materials are expensive, especially if you want to enrol them in primary school you have to buy what is called “slate and stylus” which currently cost around N10, 000. And this slate and stylus is a must if you want your child to study because it is the first learning instrument. So some parents because they cannot afford to buy such material, prefer to keep their children at home and refuse to enrol them in school.”  The teacher however acknowledges that the government supplies exercise books for the students.

TDI came to the rescue, donates hundreds of textbooks

As part of its effort to support and empower adolescents, a Kano-based NGO called Teens Development Initiative (TDI) made a commitment to addressing some of the challenges in the school, especially on learning materials.

Fadhila Nuraddeen Muhammad, Founder and Executive Director, of TDI, told the Daily Reality that they are currently working with the school authority to establish a library for the school. She said they discovered that science-based subjects were not taught in the school because of the absence of instructional materials but the students were eager to learn, hence their commitment to support with the necessary materials, especially textbooks.

She said TDI donated about one thousand books to the school that will be put to the library to make it functional.

“We have already delivered the books to the school. We are planning to raise some funds for the shelves in the library,” she noted.

Our students don’t starve, they have nutritious meals

Despite the challenges confronting the school, the students are not left to starve as one of the visually impaired students revealed. The student, Abdullahi Adamu, confirmed that: “They give us food in the morning, in the afternoon and at night.” In the same vein, a teacher in the school told our reporter that “They get good food here. Some of them cannot get what they get here in their parents’ houses. They are served three meals, three good meals a day. The government provide their breakfast, lunch and dinner. Some of us as their teachers cannot afford what they are being served in our houses.” Another teacher explained further: “In their breakfast, for instance, they are served bread, tea and egg. In the afternoon, they are given food with chicken. It is not everyone that can afford that nowadays. Every Wednesday, they eat a fish meal. In the past, after every two weeks, cows used to be slaughtered. They hardly eat food without meat.”

To be continued in part (II)

New Attah of Igala to receive Staff of Office in March