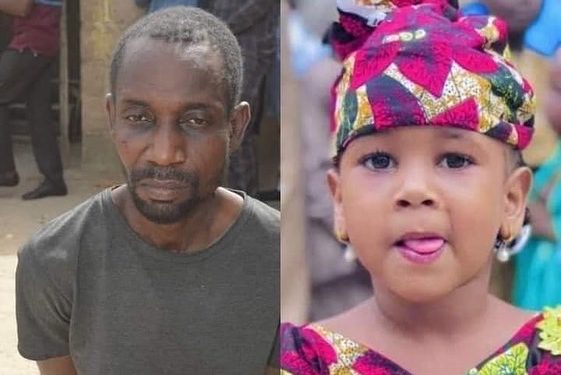 I am writing this emotional article with a heavy heart. Thousands of Nigerians are grieving a heart-wrenching pedicide that occurred in Kano State.

Hanifa Abubakar, 5, went missing on 3rd December 2021 while returning home from school. Her pictures flooded social media with a dear request that she be helped located. However, several weeks later, it turned out that she was actually kidnapped, and 6 million naira was demanded as ransom. Hanifa’s parents struggled to raise the ransom and deliver it to the kidnapper.

At the point of collecting the ransom on 20th January 2022, a 37-year old Abdulmalik Mohammed Tanko was arrested. Abdulmalik confessed that he was both Hanifa’s kidnapper and school proprietor. He further admitted that he had already killed Hanifa weeks ago with a rodent poison and buried her in a shallow grave in his school. He led security forces to the shallow grave, where the decomposed body of Hanifa was exhumed. She was beyond recognition as her body appeared to have been dismembered after the poisoning. She was afterwards given a befitting burial according to Islamic rites. Thousands of sympathizers are still mourning in extreme melancholy.

A few hours after Hanifa’s story was uncovered, a new case of pedicide was reported from Zaria. Shu’aibu Wa’alamu Ubandawaki, a Zaria-based businessman, reported that his 8-year old daughter, Asmau (alias Husna), has been killed by her abductors. He had also paid 3 million naira as ransom, but the kidnappers killed Husna anyway. Revelations later emerged that the kidnapper is their close neighbour.

Several months earlier, in May 2021, a 6-year old Mohammed Kabiru was kidnapped by his neighbour at Badarawa, in Kaduna State. This neighbour had received one million-naira ransom from Kabiru’s father but still proceeded to strangle the innocent boy. After detectives apprehended the kidnap gang, they admitted strangling the boy to death because one of the members of the criminal team feared that the boy recognized him.

Cases like this are too numerous to count. Even yesterday, the police in Kano interviewed a youth who said he had slaughtered a girl hawker after she recognized him.

Child abductors have lately developed the attitude of killing their innocent victims because they fear they might recognize them when freed. All that follows is a social media hashtag trend; a promise by the security forces to charge the suspects to court and then a brief silence before the next case arrives.

The homicide rate is skyrocketing in Northern Nigeria, and this is no thanks to our current system of governance. Since the transition of Nigeria to democracy in 1999, we see a judicial system that romances murderers with no fair regard to their victims. Despite democracy’s snail-speed judiciary to prosecute murderers, it frowns at executing them in the spirit of legal retribution.

This problem is not specific to Nigeria. It is a global curse. The governance system maintains a gentle approach to capital crimes by seeking to abolish the death penalty and public executions. Therefore, pressure groups like Amnesty International have sworn themselves as apologists of murderers. As a result, every nation is now reluctant in passing deserved death sentences, not to even talk of actually executing the death penalty. Only a handful of countries like China, Saudi, Iran and North Korea still practice public execution.

The UN-led democratic world of today considers public executions as a ‘cruel, inhuman and degrading nature of punishment’. This is why everyone shies away from public executions. For potential murderers, this is quite a protective cover to go-ahead to kill whoever they want to kill! They have nothing to fear. Take anyone’s life if you wish, and the UN and Amnesty International will protect yours! Mahatma Gandhi ingloriously articulated that, “An eye for an eye will make the whole world blind”. With this statement, Gandhi might have insensitively passed one of the greatest injustices upon the victims of human barbarism. An eye for an eye will rid the world of barbarians who have desires to pluck the eyes of their fellow humans. If we let barbarians keep their eyes, they will continue to pluck people’s eyes till the whole world becomes blind, and only barbarians will have eyes. At this time, they will have to start amputating people’s limbs since Mahatma Gandhi would decree, “a limb for a limb will make the whole world limbless”!

Countries like the UAE, Bahrain and Bangladesh recently resumed public executions because they discovered that Gandhi’s, UN’s, and Amnesty International’s way is merely idealistic. After returning to power last year, the Taliban continued its public executions in Herat by hanging four bodies of kidnappers from cranes. They said it should serve as a lesson for other kidnappers. Nigeria is still massaging Evans, her revivalist billionaire kidnap kingpin. Yet we wonder why bandits in the forests are making a mockery of the Nigerian armed forces. Do we wonder why people like Abdulmalik are out there looking for the Hanifas they will kidnap for their financial welfare?

Nigeria’s constitution still maintains the death penalty for capital crimes like murder, mutiny, terrorism and treason. The courts are passing the judgements, but they are rarely executed. A Premium Times report in 2021 narrated that Nigeria’s correctional centres are housing 3,602 death-row inmates. Of course, these inmates will never be executed under this UN-subscribed Nigeria’s democracy. Some of them will naturally die in detention after living to a ripe octogenarian or nonagenarian age. Others will be pardoned by the state governors and the president at any time they so politically wish. The murderers will be re-integrated into society as if nothing had happened. Why shouldn’t they commit another murder? Why shouldn’t the next barbarian commit murder?

This ugly scenario is why some people take laws into their hands. They decide to avenge the murder of their loved ones so that they become the beneficiaries of this controversial protection of human life championed by the UN and Amnesty International. In some cases, security forces decide to be the courts themselves, thereby making extrajudicial killings of apprehended criminals. This is because they get tired of arresting the same criminals repeatedly for the same crimes.

Nigeria has decided not to make any changes to arrest this ugly situation. But, of course, there are good excuses like; even the United States has a snail-speed judiciary when it comes to executing death-row inmates. Out of its 2,474 death-row inmates, the US executed only 11 of them in 2021. All of them committed their capital crimes about thirty years ago. So, Nigeria would say, if this is in the US, what more of Nigeria?

Therefore, it is humane that we are boiling with rage over Hanifa and Husna’s deaths. Every sane individual would do the same. We are craving that the law legally executes their murderers. But we have to understand that the problem is systemic. We have to come together as both leaders and ordinary citizens to amend our ways. Our laws need to practically show to everyone that for every eye taken illegally, an eye will follow it legally. Murder begets state execution. This is the only practical way through which Nigeria can recover the depreciated value of human life in the eyes of barbarians.

Unless the death penalty and public executions resume for culpable homicides, potential murderers will continue to have a field day.

MURIC to INEC: Warn Muslim haters among your staff