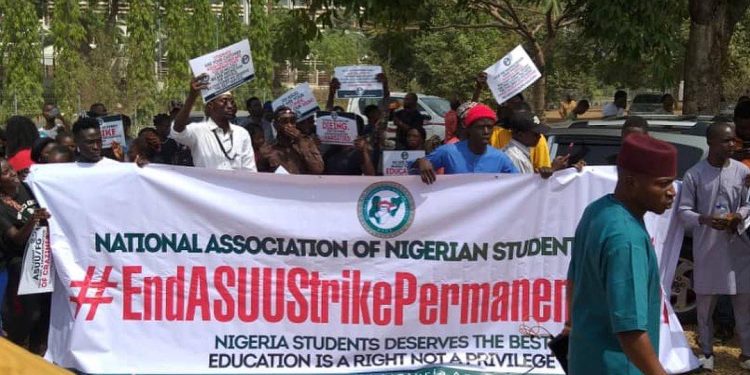 The National Association of Nigerian Students (NANS) has stormed Kano State roads to protest against the ongoing nationwide strike by the Academic Staff Union of Universities (ASUU).

The association that has frowned upon the incessant strike in the country is protesting to tell the world the situation they are facing in the country regarding their education.

The students who converged on the Kofar Nassarawa bridge in Kano City decried over delays in academics.

Singing solidarity songs against ASUU’s action with their hands clinking placards, the students said the menacing issue of the strike should by now be put to an end.

They also called on the federal government to intervene and call off the strike.

Recall that the Vice President of the Union, Comrade Yazid Tanko Muhammad, disclosed their intention to protest on Monday.

Comrade Yazid added, “So, it is a protest which, if we start, will not stop until the issues are resolved, and the lecturers resume work.

Are you wasting time or wasting data – or both?

Are you wasting time or wasting data – or both?

AbdulJabbar and the free speech conundrum