by Admin
in Entertainment, Kannywood, Opinion
0 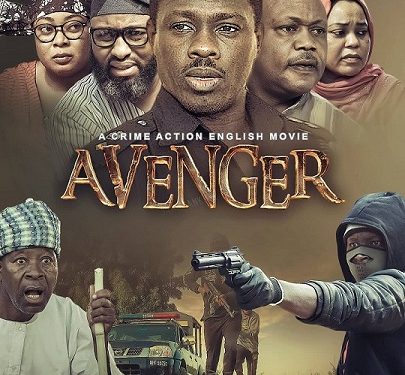 When an action movie has “Revenge” as its theme, the main focus is the “Avenger”. He is, at times, a lone survivor whose parents are brutally murdered, and his efforts to avenge their death often make the intriguing action scenes in such movies. As its title suggests, Avenger, the Kannywood English action film, is also not different. It’s a story of an avenger who vows revenge against the assassins of his family.

Jamal (M.M Haruna) is the last survivor of Alhaji Baffa Yaro’s family. He was in boarding school when his father, a gubernatorial candidate, was assassinated alongside his family members. His deceased father’s friend, Sani Mu’azu, provides refuge for him. Years later, Jamal grew into an Avenger, and Sani Mu’azu (his saviour who also trained him to be one) begins to give him the pictures of those who, according to him, are responsible for the assassination.

However, when the Avenger launches serial killings on them, he learns that they are innocent. Sani Mu’azu is the real antagonist but mischievously pulls the strings behind him. He is even the mastermind of the actual group behind the murder of the Avenger’s family. Avenger, therefore, shifts his target to the real perpetrators.

Having noticed the exposé of his true identity and that he is now the Avenger’s target, Sani Mu’azu hires professional hitmen to haunt the Avenger down and eliminate him. The Avenger’s encounter with them is conveyed in highly dramatic chases and choreographed action sequences. However, everything is not resolved when the film ends, and the phrase “to be continued” pops up on the screen.

Though a rehash of foreign films, Avenger opens on an engaging note. It begins with Sani Mu’azu, Abba El-Mustapha and Tijjani Faraga conspiring to kill the gubernatorial candidate. It then shifts to where the police are investigating the serial killings on prominent personalities by an unknown person, who is later found to be an Avenger, as he leaves similar transcription after each murder. But as the film expands, it slackens. The story proves contradictory. The narrative gets incoherent and somewhat confusing. Some unconnected scenes seem complementary as they are not serially arranged, and there are no proper techniques, not even intertitles, to clarify.

As an action film, its setting is also not fitting. So is the use of costumes and props, which is too poor. The cinematography is generally nothing to write home about. The action sequences are poorly crafted, and the editing is flawed. There are instances where dialogue is repeated, among other defects.

Compared with Kannywood’s previous attempts at action genre, like Aduniya (Dir. G. Galadima, 2014) and Gwaska (Dir. Falalu Dorayi, 2015), Avenger is much impoverished. It copies the storyline of Aduniya, while Gwaska has better production quality and a more effective setting than it has. Moreover, the English dialogue rendition is weaker than Jammaje’s “There is a way (2016)” and co.

Additionally, the portrayal of M.M Haruna as Avenger is unfit. He lacks the charisma of action heroes. The same goes with Ali Nuhu, who is portrayed as the boss of Ishaq Sidi Ishaq. The latter plays the role of the police officer in charge of the murder investigations. However, the reverse could have been better since Ali Nuhu is more agile and popular to make the required impact.

The ending is also outrageous. It shouldn’t have been inconclusive. Movies meant for the big screen shouldn’t be fragmented. But they are in Kannywood. The film in question and the previously released Sarki Goma Zamani Goma are typical examples. The filmmakers should either change or end up losing a large audience.

Finally, with all its negatives that clearly outweigh the positives, Avenger is still a watchable film for the suspense in its first few moments and Ali Nuhu and Sani Mu’azu’s eloquence in delivering English dialogue. I rate it 2/5.

Habibu Maaruf Abdu wrote from Kano. He can be reached via habibumaaruf11@gmail.com.

Recruitment advert put in our name is fake—Nigerian Army

Recruitment advert put in our name is fake—Nigerian Army