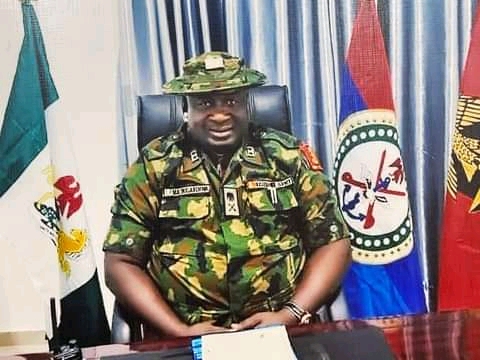 A fake Army General identified as Bolarinwa Oluwasegun has been arrested by the Economic and Financial Crimes Commission, EFCC.

According to the commission, Mr Oluwasegun was arrested for posing as an Army General appointed by President Muhammadu Buhari as the Chief of Army Staff, COAS. Bolarinwa used his fake identity to defraud unsuspecting persons. In a statement by the EFCC on its verified Facebook account, Mr Oluwasegun met his Waterloo after receiving a complaint from Kodef Clearing Resources.

A part of the statement reads: “The suspect who posed as an Army General in the Nigerian Army, allegedly made false representations to the complainant, Kodef Clearing Resources, that the President, Muhammadu Buhari, had shortlisted him and one other to be appointed as the Chief of Army Staff, COAS, and that he needed a short grant to press and process the appointment.”

The EFCC added that Mr Oluwasegun also allegedly forged a letter of appointment as COAS purportedly signed by the president to substantiate his fake claim.

Plateau Killings: ‘No place for this sort of violence’ – Buhari

Plateau Killings: ‘No place for this sort of violence’ - Buhari

Another cinema for Kannywood is a welcome development