IPOB and Southeast insecurity: Soludo to the rescue 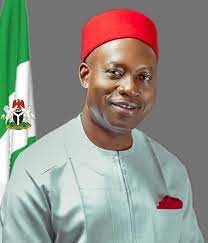 “The current trajectory is a road to desolation. Let us get around the table and talk. Let the elite in the closet come out and let’s debate our future and forge a consensus. The elite conspiracy of silence and some community leaders should end.” – Governor Charles Chukuma Soludo

The above quote was made by the Anambra State Governor, Professor Charles Chukuma Soludo at a low key but a colourful inaugural ceremony to mark the beginning of his tenure in office on Thursday, March 17, 2022.

It is not surprising for the Governor to have solicited the support of stakeholders and other community leaders in the state in order to surmount the challenges currently being faced by the state and the entire eastern region in general.

When Soludo was announced as the winner of the last November gubernatorial election in Anambra, he clearly knows that one of the most contending issues that people might look up to him to proffer solution is nothing but the rising insecurity that has engulfed the state and the entire Igbo nation.

It is no longer news that the eastern region of the country has, over the years, become a hub for maiming, killings and wanton destruction of citizens’ properties, occasioned by the activities of some miscreants tagged as ‘unknown gunmen.’ But truth be told, the origin of these so-called “unknown” or “faceless” gunmen can be traced to the military wing of the members of the outlawed Indigenous People of Biafra, IPOB group, known as Eastern Security Network, ESN.

The group, under the leadership of Nnamdi Kanu, who is currently languishing inside the Department of State Service, DSS dungeon after being rearrested in Kenya, last June and flown back to Nigeria, after he previously fled the country, upon breaking the bail conditions.

The IPOB group has over the years been actively clamouring for the creation of an independent Biafra nation from Nigeria.

According to them, the eastern region and Igbos have been marginalized and treated as second class citizens in the country in terms of appointment into political offices, resource sharing and allocation, and governance, among a host of other allegations. But alas, instead of the outlawed group adopting a legitimate manner of registering their grievances, they subscribed and resorted to violence.

The notorious group has carried out several attacks on government facilities including security outfits, Independent National Electoral Commission, INEC Offices, markets, and prisons among other strategic locations. It can be recalled that the ‘unknown gunmen’ in March 2021 unleashed terror on Owerri, the capital city of Imo State, in a night raid. Reports indicated that the guns-wielding men attacked Owerri Correctional Center, thereby releasing not less than 2,000 inmates and subsequently burning some sections of the facility.

Again, they also went ahead and attacked Imo State Police Headquarters, killed some security personnel, looted the armoury and eventually set ablaze security patrol vans that were packed at the premises. Since then, their activities have become more pronounced as they intensified their attacks at will, killing various personnel of the security forces of Nigeria including the Police, Military, DSS Operatives, Prison Warders, Road Traffic Officers just to mention but a few.

It is also on record that IPOB militants have been enforcing sit-at-home order every Monday across the entire five states of the eastern region since when Kanu was re-arrested. According to the group, this is to serve as a means of solidarity and to force the government to capitulate to their demand for his unconditional release.

However, this order has been crippling the economic situation of the region thereby dragging it to the cross. A lot of people who live from hand to mouth are denied such opportunities on a weekly basis as markets remain closed as well as schools, banks, government agencies etc. In fact, this lingering terror activity of the group is like a cankerworm that has been eating deep into the flesh of the entire eastern region people.

Reports indicated that there are some incidents where a lot of people are killed and their business places destroyed by the proscribed IPOB group members under the pretext that they have flouted the sit-at-home order.

Not only that, a number of elites in the Igbo region cutting across traditional rulers, politicians, public servants and business moguls were murdered by these blood-sucking demons. The unfortunate murder of Ahmed Gulak and that of the husband of the Late Dora Akunyele in their own pools of blood by the IPOB militants were, to say the least of their heinous acts.

Their nefarious activities are just too numerous to be outlined in this piece. Thus, let’s just leave it as a story for another day.

Meanwhile, it is gratifying to learn that presently, Governor Soludo of Anambra has stepped up an effort to stem the rising tides of insecurities haunting the state and the region at large.

Soludo, while featuring in an interview with the Channels Television, promised to grant amnesty to IPOB members who agree to call it a quit by laying down their arms. Though his plan has been countered by the Ohanaeze Ndigbo, emphasizing that the vicious group have been causing violence to the entire Igbo nation all under the pretext of actualizing the Biafra nation, they however welcomed the idea of rehabilitating the aggrieved Igbo youth in order to have everlasting peace in the region.

To that effect, the Governor has just appointed and unveiled a 15-member Truth, Justice and Peace Commission to stop the activities of the indigenous people of Biafra (IPOB). The committee is headed by the human rights activist, Prof Chidi Odinkalu with Ambassador Bianca Ojukwu as Secretary.

With these recent unfolding developments mapped out by the Governor, it is hoped that the IPOB members will lay down their weapons and embrace peace so as harmony and normalcy could finally return to the Igbo nation.

Mukhtar, a public commentator, writes from Kano via ymukhtar944@gmail.com.

Is the Buhari-led government on holiday?

FG must stop these senseless killings in the North – Ulama Forum